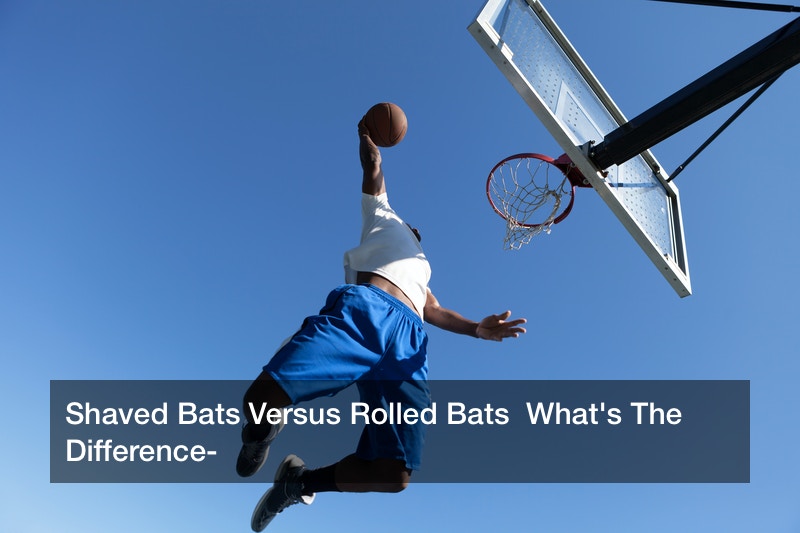 Baseball or softball bats may seem simplistic enough; but they’re actually quite complex, and different bats will perform in different ways. Your bat may seem to be the right fit at first glance — but over time, you may want to modify your bat, or perhaps “trade it in” for a different style. Perhaps two of the most common types of modifications to baseball and softballbats are shaving and rolling.

Shaved or rolled bats are sometimes referred to as “doctored bats”. While some choose to shave or roll their own bats, this doesn’t provide consistent results, and it’s easy to shave or roll a bat in an inefficient or incorrect ways. This may result in a bat that is worse off than what you began with. However, there are rolled bats for sale, as well as shaved bats, and bat shaving services on he market. Rolled and shaved bats can be bought as is, or you can use a service to ensure that the bats you already own are rolled or shaved correctly. Below, we’ll look into the differences between rolled and shaved bats, as well as the different advantages and disadvantages to these practices.

What Is Bat Rolling?

Before looking into rolled bats for sale, it’s important for you to understand exactly what a rolled bat is. Most often, bat rolling is done for slow pitch softball. It’s used to increase the pop and distance of a bat, and decreases the “break in” time of a bat. A rolled bat becomes “hot” faster; usually, it takes a bat about 500 hits to become hot. The idea behind bat rolling is that the bat has its maximum power with minimal wear and tear. To become “rolled”, a bat is placed between two different rollers, and a press squeezes these rollers together. The bat is pushed back and forth, and its composite fibers are compressed. The result is that the barrel walls of the bat become more flexible, creating a “trampoline” effect that makes for a more effective bat.

Recently, newer methods of bat rolling have come to the forefront. In one method, a bat is heated before it’s rolled — this is called “heat rolling”. The next method involves employing compression testers. These testers ensures that bats are always rolled with the same amount of pressure, which lessens the risk of the bat breaking or chipping.

What Are Shaved Bats?

Essentially, a shaved bat cannot exist without it being rolled first, as bat shaving is done in addition to bat rolling. Shaved bats will have had their end caps removed and their barrel walls thinned out. This further increases the aforementioned “trampoline’ effect. While bat shaving can add 40 feet of distance to hit balls, it also will decrease the lifetime of the bat, as the thinner walls will lead to decreased durability. Furthermore, shaved bats do poorly in low temperatures, and should not be used in temperatures below 65 degrees. Rolled bats for sale can be shaved, but don’t have to be — it really depends on your preference.

Should I Buy Rolled Bats?
If you’re looking into rolled bats for sale, you’re likely dissatisfied with the performance of your bats. While there is some debate regarding rolling or shaving bats, lots of high school or little league teams look into buying rolled bats. Rolled bats can be easier for young players to work with, and that increased ease can help young players increase their confidence or skills. Remember that different leagues have different expectations when it comes to rolling or shaving bats. However, at the very least doctored bats can be great for young players to practice with.

Again — think about your purposes and expectations when buying rolled or shaved bats. These bats will perform differently from unaltered bats, and will for that matter have different lifespans. But if you do decide to move forward with acquiring rolled or shaved bats, work with a professional service. Don’t rely on amateur techniques; choose companies with proven results.